There are times when I do  a lot of work that no one but me will see, like the time I painted the insides of the cabinet under my kitchen sink, which is weird, because the outside of the cabinets look terrible. Then I painted the bottom section of the kitchen pantry and let it dry while I spent the entire day throwing crap away in the garage again, sweeping and arranging the lawn mowers and bicycles in a way that Ben (and maybe I) could have some space in there to work out on the heavy bag and practice Tae Kwon Do.

My garden was full of weeds and the grass around the mailbox was 20 inches high.  Even my bedroom (which no one else was going to see either) was a mess with shoes everywhere, sweaters hanging on the door knobs and dust covering the unread books on the nightstand. 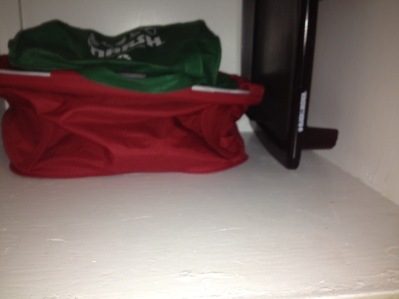 Still, I felt better when I opened the pantry or threw something in the trash under the sink and saw the fresh white paint.

What was going on in the kitchen was not unlike what I had been doing on my own insides. The past few years, I’d spent a lot of time out on the hiking trails, riding my bike, and doing yoga. These things are all good for the insides, but if I had to be absolutely honest, I was doing them for some outside reasons too; that primarily being the outside of my thighs, also known as ass extensions.

And while physical activity has always been good for my soul as well as my body, I had been neglecting straight-up soul work for some time. Spring  had a hard time arriving that year. Normally, if I can get through February without medication, I’m good because with March usually comes some hope that the weather will warm and the sun will begin to shine again.  That year though, it was May and we had just gotten a couple of frost warnings and the sun hadn’t been out for more than a few minutes per week.  We had more rain between January and May than we had all of previous year.  I honestly thought I would never go outside again, never show my fleshy legs again, never be happy again.

The long winter took a toll on my psychological well-being, too. Spring took so long getting here, that I just figured it never would. I was a pale blob of depression, anxeity and widening ass flesh.  Being forced to spend so much time inside, I had no choice other than to look into places I didn’t normally look, and slowly I began tidying up my own insides in the same way I had been painting the hidden cupboards of my kitchen. I read my first Caroline Myss book that spring and from what I understand, it’s a tough one to start with. But it was the one on the shelf, when I decided to go to the real bookstore—not the half-priced one—and find whatever book on spirituality spoke to me.

Little did I know that the Barnes and Noble near the rugby practice fields was moving and only had about ¼ of the normal books on the shelves.  But I was determined to find something and Myss was the only author on the shelf I recognized, other than God and Abraham, so she landed in my hands.

In the book she says this (which I think she specifically wrote about me):

“The archetypal hero’s journey . . . always begins with a process of separation or alienation from the tribe, followed by a series of difficult challenges that the hero must meet alone. The journey culminates in a descent into the abyss of self-doubt and a loss of faith in the Divine, but then results in a vital transformation of trust, which in turn leads to a revelation of some new knowledge, insight or wisdom.”

I am almost always in the abyss of self-doubt and loss of faith, which, if you think about it, is not what one would normally think I’d be facing after my own series of difficult challenges, e.g. things catching on fire, lots and lots of flooding incidents (By the way I fixed my constantly flooding basement with a 51 cent piece of plastic from Lowes.), tons of trash and rodent removal, beginner’s Tae Kwon Do, and the loss of my favorite yoga instructor. Normally, you would think making it through all that and more, I would be the poster child for self-esteem, deep faith, and glistening skin, but I wasn’t. I  was the complete opposite. My hair was falling out, my skin looked terrible, I was full of anxiety, and I couldn’t hear God speak if she shouted at me in the middle of the night from the foot of my bed.

Myss is right though, nowhere is it said that if we overcome a lot of adversity and figure out how to fix the lawn mower are we rewarded with clear eyes and a fruitful spirit.  We are only given more knowledge, and hopefully, greater understanding.

So of course the next step is self-doubt and a loss of faith. We used up all our naive faith and confidence doing things we never thought we could do before, like fix a lawn mower and survive an electrical fire. Eventually things calm down, though, and there’s time to poke around inside and uncover some things that aren’t so evident from the outside. Things like, a transformed trust. Maybe less blind and childlike, but born from greater knowledge and experience. Maybe a self that is less about it and more about others. And perhaps even an ass that may have gained a pound or two, but has also gained some hard-earned wisdom.

One thought on “Inside Out”