My DIY projects have had as many false starts and stops as my love life.  As soon as I think I’m ready to start a project, I have to stop and Google something, or stop and find protective eye wear, or stop and nurture a new wound.  The day I learned how to use an electric chain saw to cut down some overgrown juniper bushes in front of my house, that was okay. Using a chain saw seemed dangerous so I knew I needed help, but being the resourceful loner, the only help I was willing to allow was internet videos.

I knew only two things for sure about using an electric chain saw. One, I shouldn’t cut through the power cord, and two, I shouldn’t cut through my femur. Armed with that knowledge and some safety goggles, I set out to start cutting. I had used this chain saw once before just to cut down a small dead spruce by the garden. That only took a minute or two and was simple enough, so I figured I could master this job, too.  I started by cutting one branch at a time at the base of the shrub, carefully dragging each away so as not to cause any kickback and accidentally cut through my femur like I mentioned. But by the third or fourth branch, the chain came off.

Of course I had no success trying to put it back on like a bike chain so I stopped and Googled “how to adjust a chainsaw chain,” and found this great video you should check out. I had to watch it twice because I got distracted by the hot guy doing the demo and the way he says “feel.” But once I got a grip on myself and listened to instructions instead of looking at his arms, I understood pretty much what to do.  Like I said, my chain saw is electric and the one in this video is one of those gas-powered macho ones, but they work pretty much the same.

I’ve had this chain saw  for a long time. I have a vague recollection of one of my exes going out to buy it for a project at my old house. I was thinking he would come back with one like in the video, but what he came home with was this: 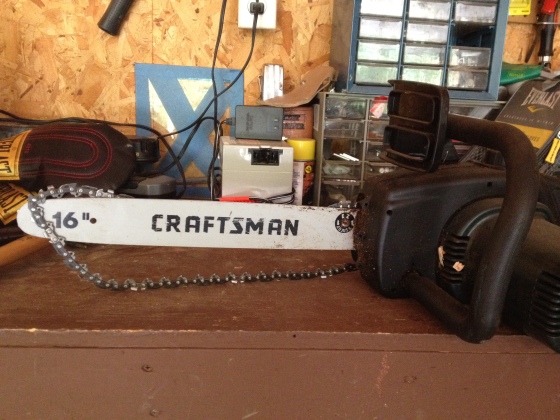 A  16-inch electric Craftsman. Not exactly what you want to see your man holding up triumphantly, if you know what I mean. It’s a girl-saw. Whatever it was he wanted to do with that thing, it did not make me want to watch.

I don’t remember if it did the job back then. I think we probably called someone to come and cut down whatever we wanted cut down. As it turns out, though, years later it’s just right for me.  I would not be brave enough to use one of those macho saws anyway.  If I were I would have cut down these shrubs, trimmed the big oak tree, removed the fallen pine from the back yard, and extracted the hollowed-out beech tree by now.

Anyway this video made it look so easy to fix the chain and I was kinda excited because I had dedicated two days over the holiday just to clean and organize my garage so I knew where all the tools were. So I followed the directions on the video and loosened the “clutch cover nuts” and adjusted the “chain tensioning screw” but when I tightened everything back up and ran the chain through like the hottie in the video says, it drooped where the chain enters and exits the clutch cover. So this time I took off the cover and found all kinds of saw dust gunking everything up in there.

I just cleaned it out with a whisk broom and put everything back together and it worked fine. However, I did need to readjust it again about half-way cutting down the first shrub. Much like Mr Hottie in the video says, it requires “frequent” adjustment.

After I had all the branches cut off both shrubs, I cut the stumps down low enough to cover them with dirt. Didn’t I  read somewhere that stumps will eventually die off because they get no sunlight, and therefore, no nutrition from photosynthesis?  So rather than dig the monster roots up, that’s what I opted for. I just didn’t have the strength or will to dig up these roots.  Sometimes I play the girl card when it suits my needs.

One thought on “Chainsaw Massacre”